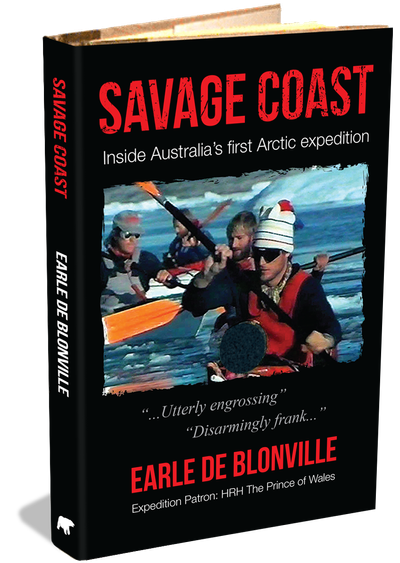 Savage Coast is an unrivalled story for our highly uncertain times.

Here is the leader’s inside story of Australia’s 1985-86 historic first Arctic expedition, to an uncharted coast in early winter. It’s an epic of what happens to a $2.5 million voyage to the end of the world where all your plans are blown away by a winter hurricane and all that’s left is slow starvation in a soaked sleeping bag on a wave-battered coastal rock, with no possibility of rescue or of your bodies being discovered, except by hungry polar bears.

Savage Coast offers an almost unrivalled look inside the reality of complex leadership decision-making where almost everything conspires against the expedition’s success, or even its survival. In this story of ongoing crises there are non-stop insights and valuable lessons for those who can expect to be engaged in tomorrow's front-line climate crisis leadership.

Extract from the first edition cover  ---

"A disabled yacht is towed into a remote Arctic village just as winter begins. It has been drifting amongst offshore reefs in freezing sea fog, as giant icebergs cruised past. The engine no longer works, the radio and compass have failed and the sails and rigging are largely worn out. Aboard is a dispirited crew. They have travelled here from the opposite side of the world, now they are trapped, unable to escape the looming freeze by heading south for somewhere warmer. Beneath the surface of the crew’s brittle cohesion, there are tensions waiting to explode and one member has already erupted in uncontrolled violence. As winter’s first hurricane blasts down from the 10,000-foot high icecap and through the village at 240kph, the die is cast for a journey none of them could have imagined."

“A masterpiece of exploration by a poet of action”
- Bill Green, Author and Screenwriter: ‘Terminator 2’.

“A fascinating exploration of an explorer”
- Phillip Adams. International Broadcaster

“Reveals that leadership cannot be taught, no leader is infallible and there is no single recipe for success.”
- Richard Gilmore, Executive Director: EarthWatch Trust

“This book is a powerful account of an expedition that Earle de Blonville led to East Greenland in 1985-86. This is a powerful story of privation, courage, obstinacy and tenacity, full of sharp insights, vividly written, an unvarnished record of a major achievement. The story, with its freshness and immediacy, is timeless, demonstrating what charismatic leadership can achieve, against all odds.”

“This is a brilliant, beautifully written testimony to the resilience of the human spirit. The book tells Earle de Blonville’s own story as the leader of Australia’s first expedition to the Arctic in 1985-86. It illustrates the power of one man’s vision and the courage of the author and his men to rise above extreme adversity to carry it out. It offers rare glimpses into the extraordinary weight of responsibility he shouldered. This book should appeal to anyone seeking to chart a course for themselves or their organization in the rapidly changing uncharted landscape and uncertain futures of our fragile planet.”

“How Earle and his hard-bitten team survive their battle with the elements is nothing short of a miracle. Earle is a fine lyrical writer with enchanting passages on the subtlety and spirituality of polar seascapes. Importantly, he is brutally honest with descriptions of the rawness of basic living in makeshift camps ashore and with the agony of personality clashes. Every nautical mile of this journey is hard-won. For Earle, there could be no turning back.”